Queues around the world

Home > Blog > Queues around the world 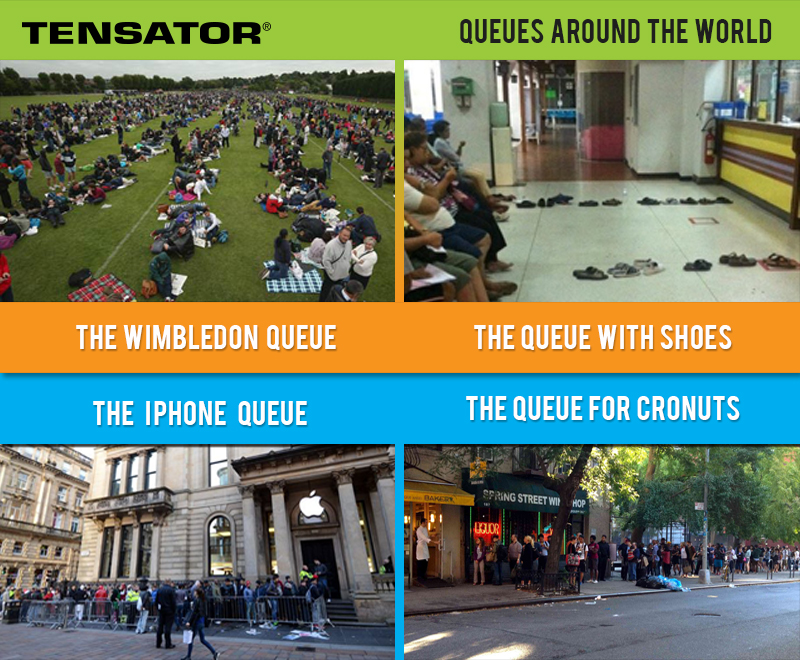 With the summer season fast approaching, businesses will be no doubt be preparing for the increased footfall from tourists and implementing queue management systems to ensure optimal visitor flow. However, around the world, there are different approaches to queuing. Here at Tensator, we take a look at some of the world’s most famous queues.

The Wimbledon queue– The queue at Wimbledon has become so famous that the tennis event has published its very own guide to queuing. The queue at Wimbledon allows people to buy on-day tickets for tennis matches and has been designed to ensure fairness. The queue is so long that on arrival visitors are issued with a Queue Card. This card is dated and numbered to show individual positions within the queue and helps stops queue jumpers. For the more popular matches, people have been known to queue for more than one day.

The iPhone queue– When Apple announced the launch of its iPhone 6, stores around the world started planning about the best way to accommodate the huge demand expected. It was reported that around 1,000 people queued outside the Apple Store in London; stores in Japan had over 1,300 customers queuing, while, in the US, entrepreneurs were paid to wait in line outside New York’s flagship Apple store weeks ahead of the launch to reserve their queue position for others.

The queue for Cronuts– The cronut is a mix between a croissant and a doughnut, but is it worth a two and a half hour wait?  There are only a few hundred cronuts made every day and stock soon runs out. With this in mind, is there any surprise that some people are willing to begin queuing at 4am, five hours before the bakery opens, to get their hands on some cronuts?

The queue with shoes –Remember a few years ago, when a well-mannered line in Thailand went viral? The image shows members of the public sitting down after they have marked their position in the queue with their shoes. This efficient method of queuing means that the customers didn’t have to stand in line to reserve their space, and they were then freed up to either sit down and relax, or complete another errand.